We are often pushed into situations we least expect. At such times a prayer goes a long way in restoring our faith and giving us the strength to handle what lies ahead. Time and again we hear stories from people’s lives about the magic of prayer, the many miracles that follow a heartfelt prayer. Here is one such incident that restores our faith in the effect of a humble prayer.

Whenever you hear a siren, what is the first thought that strikes your mind? There probably is someone in distress. Human tendency is to empathize with that unknown face and wish that nothing big happens. This is such a noble thought and one such humble gesture is what changed the life of the woman in this story.

Karlina Fulk was having one of her normal evenings. She suddenly heard sirens in her locality. As she always did she wanted to know what the problem was and pray for the concerned person in trouble. She rushed to check if she could find any information on the Neighborhood Watch Page. Her doubts were right. She found a report about a major accident that had recently taken place hardly 5 miles from her house. She could understand from the report that it was pretty severe and the driver had to immediately be extracted from the scene. It was also mentioned that there was a rescue helicopter on its way. This clearly showed her that the situation was grave. She sat down and prayed for the stranger who was injured and the people in the family. Little did she know that she was praying for her own family.

She received a call after midnight. It was her parents on the line. They gave her the shocking news that her younger brother had met with an accident. The truth came hard on her. The victim she had prayed for so dearly was her own brother, Rafael. Without a delay, she went to the emergency room where Rafael was being treated.

Talking about how she felt on hearing the news, Karlina said, “Nothing will prepare you for the crippling fear that consumes you when someone you love has been seriously hurt. The kind of fear that literally brings you to your knees.”

The situation was critical and there was very little that the doctors could actually do to help Rafael. He had drifted into a coma. Days that followed were the toughest for the family. Things were not getting better with Rafael. His body did not seem to respond to the treatment. The doctors who were on the verge of losing their hope informed the family that the only chance left was if he woke up from his coma.

It was a true miracle when, after a week Rafael finally regained his consciousness. But there was some bad news waiting for the family. The doctors informed them that he had lost his memory. When the worried mother of Rafael asked the doctors if her son would be able to resume his college, the doctors gave her the news, “He doesn’t know his name. He can’t even tell time. He will never go back to college.” It was a terrible blow to the family. 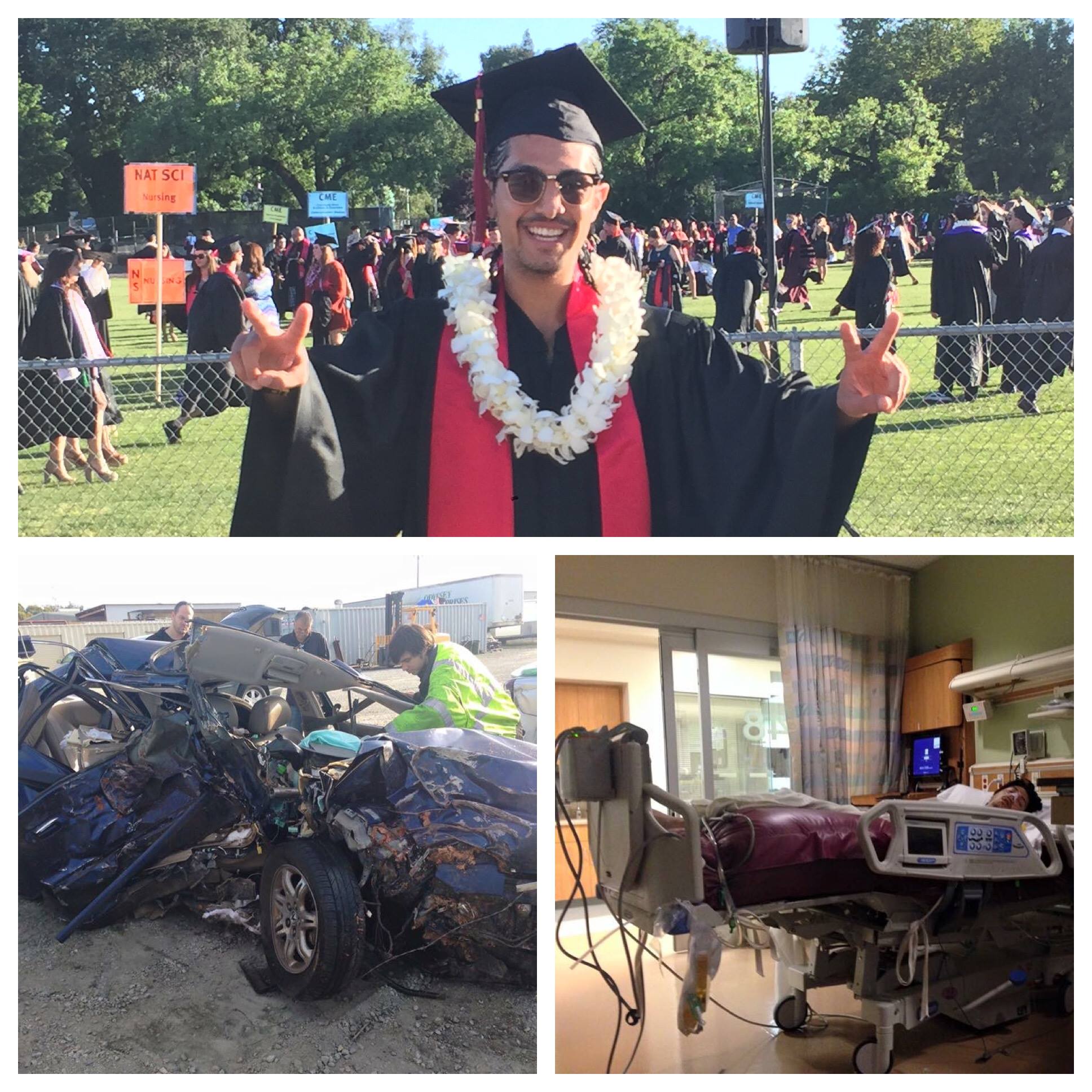 The family’s prayers slowly started showing its impacts. Rafael was kept in the ICU for eight days, trauma ward for seven days and then in an acute-brain-injury ward for 21 long days. It was not all- he then had to be kept at a post-acute rehabilitation center as an inpatient for 6 weeks. He was monitored for 7 continuous months as an outpatient at the rehab center. These were dark and hard days. But they were totally worth the pain that the family underwent. Miracles continued to happen in their lives. He was recovering at speeds that the doctors had not imagined.

The story doesn’t end here. It does have a happy ending- a very happy one. Rafael, once he was fully recovered attended college again. He also managed to successfully complete his BA degree in Communications from the California State University, Chico. After two and half years the family finally got what they had always dreamt of. Karlina took to Facebook to share her pride and ecstasy when her brother broke all doubts and graduated. Expressing her joy she said, “From nearly losing him, to preparing ourselves for the worst, to finally watching him achieve this miracle, we’ve watched him come back to us.” She went on to talk about who her brother really was, as a person and how much they loved him and missed him when they nearly lost him in the accident.

She went on to explain how her family suffered when he was struggling, “He’s come back to us. For every night we sat by his bedside in the hospital, every long drive to rehab and back, every doctor visit, every appeal letter, every time we collapsed to our knees sobbing from the weight of it all…every ounce of pain was worth what we’ve been given. A second chance, an opportunity to witness a miracle but most of all, we’ve been given Rafael back.” Rafael now strives to take every step to make sure that he enjoys every moment of his life. There was a time when the doctors had told the family that Rafael would not be able to handle the storm. To that Rafael remarked, “I am the storm”. Rafael’s determination, the family’s love for him all come as sources of inspiration.

Share this story to let others know about the power of prayer!