Last summer, Tia and her 76-year-old dad, had already walked for three hours when they made it to the top of the mountain. As they were climbing down they noticed an injured dog whose owners were nowhere in sight.

She knew he couldn’t make it down the treacherous mountain in the shape he was in, so she picked up the 55-pound Springer Spaniel, put it on her shoulders, and made the descent down the mountain. The hike finished 6 miles and took 6.5 hours for her to get to the bottom.

“We had to hike through snow, we lost the trail at one point,” explains Tia. “It was one of the hardest things that I have done in my life.”

Her dad took a photo of her lying down for a break at one point with the dog sitting on her. The dog’s weight with the hike’s difficulty had her almost in tears, and after her break, Tia describes how she had to switch to prayer to get through strength for the remainder of the hike. 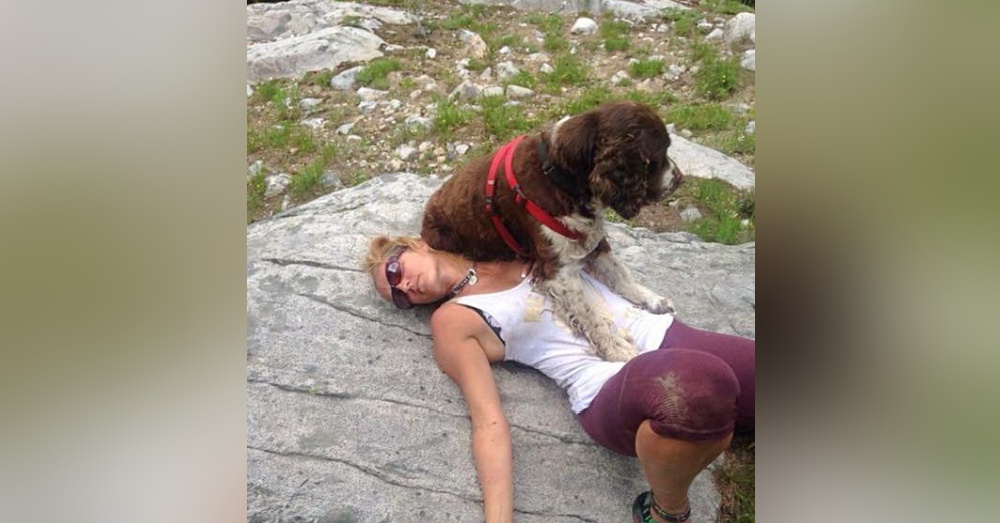 “I got underneath him to pick him up to go again, and again felt the tears coming. I said a little prayer at that point, because the weight was hurting my neck, I had a really bad headache, my legs just felt like they were going to crumble at any moment,” Tia shares. “As I said that prayer, I literally felt the weight lift off of my shoulders and I thought ‘Ok, there must be a lost hiker that’s behind me helping me. So, I turned around, probably five or six times, looking for someone. There was nobody there. At that point I knew that divine intervention was happening. I was getting help.”

Once she got to the bottom of the mountain, she saw a note about the lost dog, whose name was Boomer. After calling the owners, Tia found out that they had unleashed Boomer while they were hiking, and he had run onto a snow-covered crevasse and slipped off. He had fallen from a one-hundred-foot cliff! Only his front paw was badly injured thankfully and an upcoming surgery will hopefully have him using that paw once again.

Because the owners of Boomer were moving to Arizona, they had already planned to give him to someone else. But Tia hoped for a different result.

“It pulled at my heartstrings all night long. When I woke up the next day, my first thought was ‘That dog’s supposed to me mine,’” explains Tia.

So, she messaged the owners and explained on the mountain she had really bonded with Boomer and she really wanted to keep him. The owners agreed, and now they are together again. In her moment of need on the mountain, she saved him, and now, after his accident, she’s nursing him back to health in the safety of his new home.