Bears are amazing creatures, but they can also be very, very dangerous! One black bear was found roaming around in one Florida neighborhood just south of Tallahassee. Wildlife officers from the Florida Fish and Wildlife Conservation Commission we called quickly to the scene and immediately began working to rescue the bear and take it back to its natural habitat.

But the bear was frightened and ran into the ocean when a tranquilizing dart was shot at it. The animal started swimming out in the Gulf of Mexico, but then the effects of the tranquilizer began to make him drowsy. Biologist Adam Warwick was watching with fear as the bear kept swimming farther and farther out into the water. Adam knew that something had to be done quickly to save this poor bear from drowning. 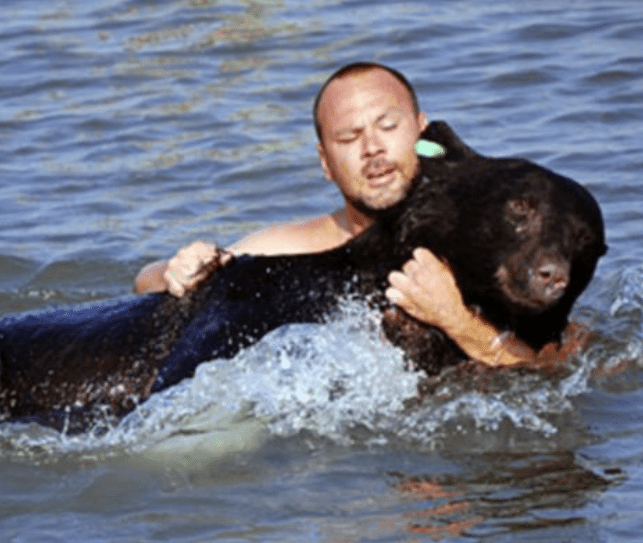 Adam jumped into action and quickly took off his shirt and shoes. He jumped into the water in an attempt rescue the 375-pound bear. “I just wanted to try to get in front of him and keep him from swimming out there and drowning,” Adam told local news.

“I got in front of him, tried to create some splashing and some commotion and tried to get him to go back to shore. But he wasn’t having any of that. The scariest part was probably when he decided — he started looking at me as if he wanted to climb up on me to keep from drowning and, at one point, he reared up on his hind legs, so I’m looking at a six-and-a-half-foot-tall bear. Instead of lunging forward, he fell straight back and was submerged for a couple of seconds and, that’s kinda when I moved in.”

Luckily Adam was able to get the bear back to shore safely, it was about 25 yards that the bear had swam until Adam jumped in to help. He kept the bear’s head above the water as he swam with it back to dry land.

Amazingly, Adam only suffered few scratches on his feet from the ocean floor and one scratch from the bear, not bad for all of the work he did! What a brave man! 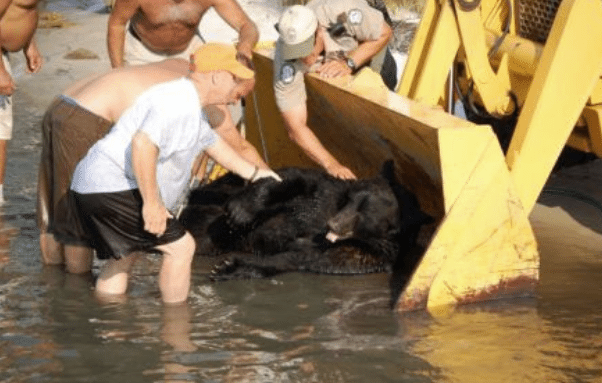 Share this story with your friends who love animals to amaze them with Adam’s bravery!