We are all given trials and misfortunes in life. During all the trials we go through, it’s important to remember that God is always with us and that he has a plan for us. He loves us and he will never forsake us, we just need to trust him to see us through. Cancer is one of those misfortunes that a lot of people are faced with. It tries to take a lot away from the victims it targets. The gravity of things can escalate rather quickly as cancer has the ability to alter your life’s path in a drastic way. Between the treatments and cancer itself, there’s not much left that’s predictable and familiar. 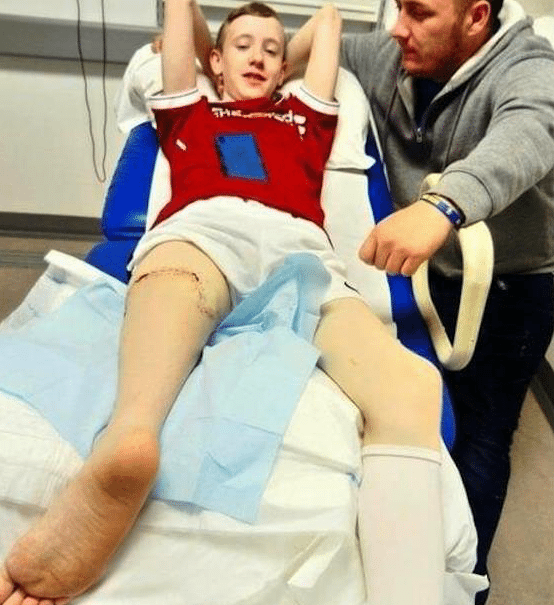 A boy from Strabane in Northern Ireland was misdiagnosed with growing pains in his leg when in fact, he had rare cancer that affects the soft tissues. He was only 12 at the time of his diagnosis. It’s easy to see why the doctors might have diagnosed him with growing pains, as he was, after all, a growing boy. But sometimes, these pains are not as innocent in nature as they seem. Tristan Stewart suffered from these so-called ‘growing pains’ for two years. He even had a lump removed from his leg, but the lump was later found to be cancerous. Tristan was then correctly diagnosed with synovial sarcoma, which is most prominent with teenagers and appears mostly in the limbs. Mandy Stewart, his mother said that “We were given two options — they could undergo a full amputation of Tristin’s right leg or a rotationplasty.”

Rotationplasty, according to the doctors was a “compromise between amputation and limb salvage … It allows the ankle joint to be used as a replacement for the amputated knee.” This means that the foot can be reattached to the leg, only backwards, and working as a knee. Tristan took a few weeks to decide his course of treatment. He was also concerned about his ability to play sports again as he was an avid soccer fan. He finally decided to go ahead with the rotationplasty since that’s what allowed for the best possible chance to play again. Mandy said that, “…Tristin turned round and confidently said he wanted the rotationplasty, he told me ‘Mommy, that means I’ll have a knee and more function.’” And so, on the 7th of June 2017, Tristan underwent his operation. The doctors removed a portion of his leg and reattached his foot backwards to his thigh. 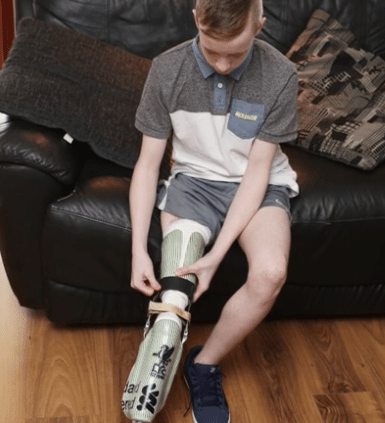 “When (we) went in to see him after the operation you could see under the covers that his leg was gone, and Shane and I were nervous to see what (was) underneath,” said Mandy. He’s now in recovery. It focuses mostly on regaining function in his leg and learning how to walk and run with his new knee and a prosthetic leg. Tristan has high hopes of one day becoming a Paralympic athlete. Seven months after his operation. Tristan can walk without the use of crutches and is trying to raise enough funds to get a prosthetic that’s better suited for running. 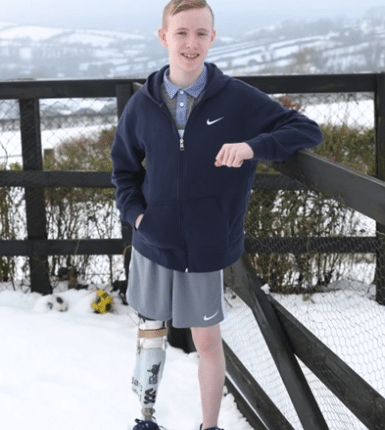 Share this story and please keep Tristan in your prayers!