It is a common practice to buy gifts for a newlywed couple. It’s not unusual to get something you think will help them in married life, nor is something sentimental that could speak to more than what money can buy. I was particularly interested in Kathy and Brandon Gunn’s story for this reason. You see, Kathy and Brandon were married for 9 years and one last wedding present had yet to be opened.

The gift came in a white box that they left in their closet sitting on top of a shelf. The great aunt of the bride, Aunt Alison, gifted it and scribbled across an envelope attached to the package: “Do not open until the first disagreement”… When Aunt Alison first handed the package to the Michigan couple, they agreed to honor their wishes and refrain from opening the package.

Of course, they had squabbles and the occasional fight over the years, as all couples do, but they continually refused to open the box for a different reason than she had wanted.

In a post written by Kathy, she explained their reason behind keeping the box sealed: “There had obviously been plenty of disagreements, arguments and slammed doors throughout our 9 years. There were even a couple of instances where we both considered giving up… but we never opened the box.

“I honestly think that we both avoided turning to the box because it would have symbolized our failure. To us, it would have meant that we didn’t have what it takes to make our marriage work – and we’re both too stubborn and determined for that. So, it forced us to reassess situations. Was it really time to open the box? What if this isn’t our worst fight? What if there’s a worse one ahead of us and we don’t have our box?!? As my Great Uncle Bill would say, ‘Nothing is ever so bad that it couldn’t get worse.’”

Then, one night, it all clicked. Kathy and Brandon had put their two young children to bed and were enjoying a glass of wine. A conversation was started regarding an upcoming wedding they were attending in Kalamazoo, where they had met and attended college.

In the midst of the excited discussion, they began to bounce ideas as to what they might get for the new couple in terms of a gift. It was then that Kathy thought back to their own wedding day, and which gift had left a lasting impression.

“The funny thing? The gift that meant the very most was still sitting in a closet… unopened,” Kathy stated.

The box had stayed in a closet for nine whole years and three house moves, the couple too terrified to open it incase there was an occasion in the future where they needed it more.

On that evening, however, as they talked about the upcoming wedding of their friends, they decided it was finally time to open the box.

“Go get a pizza, shrimp or something you both like,” the note to Kathy read, while Brandon’s told him to “Go get flowers and a bottle of wine.” 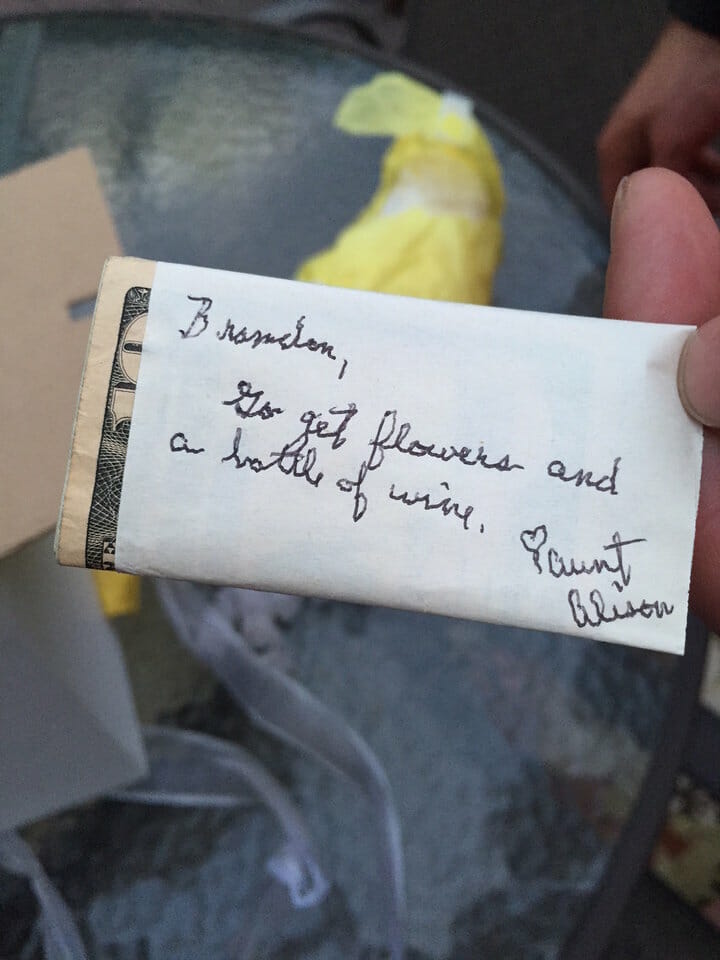 There was also a crystal flower vase, two crystal wine glasses, bath soap, lotion, and bubbles, all designed to help Kathy and Brandon overcome any argument or trouble they might have faced.

It wasn’t the actual objects that meant as much to Kathy, however, as the powerful words imbued within the gesture of giving them.

“All along, we assumed that the contents of that box held the key to saving a marriage – an age-old trick – unbeknownst to us rookies,” Kathy explained. “After all, my Great Aunt and Uncle had been married for nearly half a century. So, we thought the box would save ‘us’ – and in a way it did.”

With the box an ever-present, tantalizing option, it served to teach the couple patience, empathy and compromise when they might have simply turned to it at the first opportunity.

In the end, they didn’t have to open the box when they were struggling, but rather when their marriage was strong.